Every colony has one. That last elusive cat.

Stefanie and Kylie had been trying to catch Lacey for over a year. A wide territory and other feeders in the area made her either uninterested in the bait left in traps or unseen entirely. Stefanie caught kittens as they were born and found them homes. But Lacey was always the target. 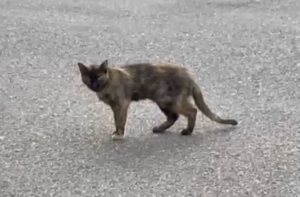 Then one day, Stefanie spotted Lacey, lacking her usual Tortitude. She had lost a lot of weight. There was drool dripping from her mouth.

Stefanie and Kylie set out with a drop trap… and they finally caught her!

Lacey was spayed, and it was determined that there were dental issues, though the clinic was unable to diagnose anything specific. The doctors estimated that she was nearly 6 years old, despite the fact that Stefanie knew she was only 2. Something was seriously wrong. 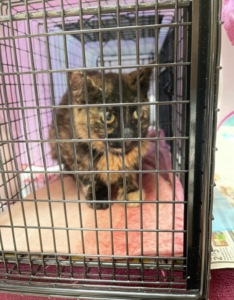 Stefanie couldn’t release Lacey like that, so she sought a follow up appointment with her own funds. Not all vets will see feral cats, and finding an appointment for dental work can take months – but Lacey didn’t have that kind of time. Lacey is a community cat, and prefers to live outdoors. And she was so hard to trap the first time, who knew if she could be trapped again! Stefanie bought a deluxe crate and CPAW NJ volunteer Jen T hosted Lacey for a few weeks until her appointment. 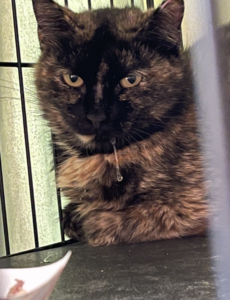 The doctor diagnosed Lacey with granulomas in her mouth due to FIP. He said that Lacey’s counts for FIP were actually very low, and it was likely flaring up only because of the granulomas. Luckily, the granulomas were treatable with steroid injections and antibiotics.

Lacey received her treatment and was monitored for a few days. She improved greatly and was released back to her colony. She has gained her weight back and looks healthy! Prior to being trapped, Lacey would not come close to Stefanie. But now she seems to trust her loving caregiver. “They know we help!” said Stefanie.

Please donate $12 today so that we can continue spaying cats like Lacey and help prevent kittens from being born outside. 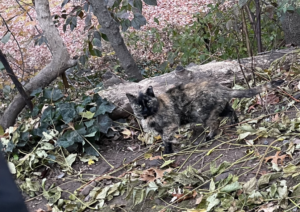 Read more about Lacey’s colony (and see some of her kittens) here.